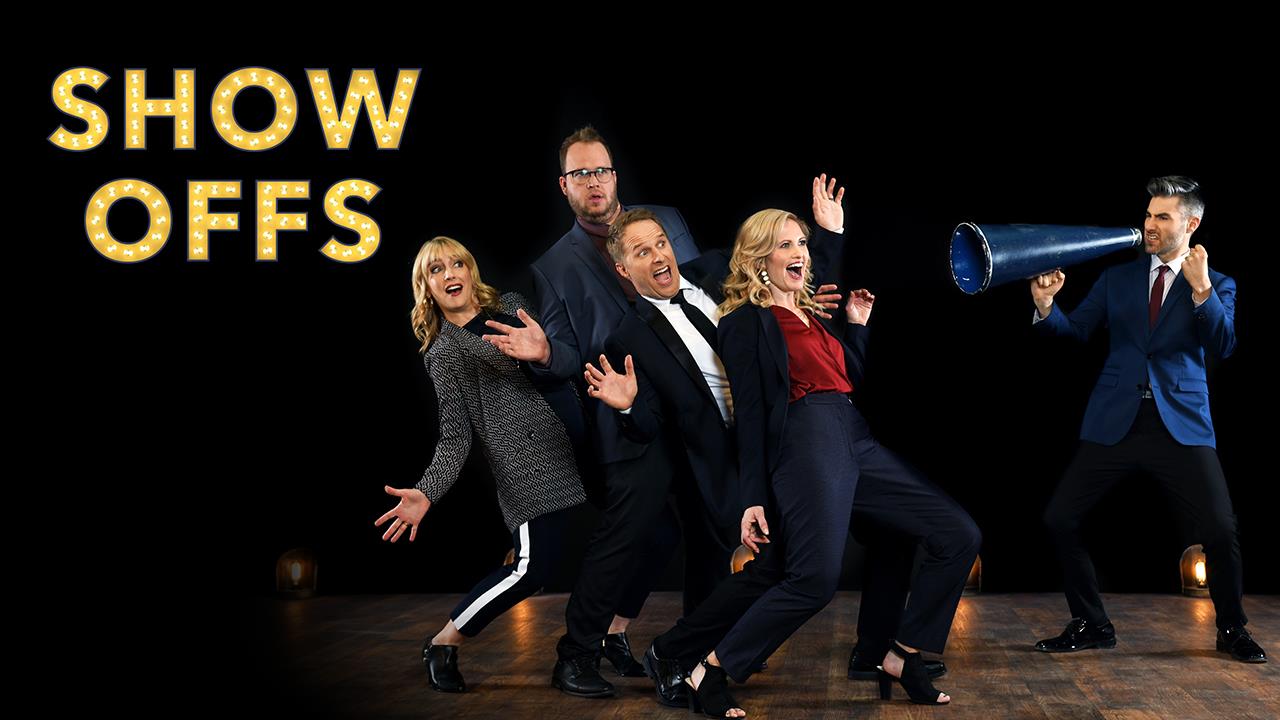 [dropcap]H[/dropcap]ow’s that for a headline? We’re back again to give you the lowdown on the new shows hitting BYUtv’s lineup this spring. First up is Show Offs. Who are these Show Offs you ask? They are a troupe of long­form improvisers. With no script and no rehearsals, thee cast will be forced to improvise a musical on the spot. From genres like Western to Golden Age Entertainment, these performers need to be quick witted to keep up. The genre for each episode’s impromptu musical is chosen by vote of the audience and then through audience suggestion the title of the musical is chosen. If this sounds familiar, you may remember legendary improv show Whose Line Is It, Anyway?, and we get similar results with Show Offs without any of the entendre.

There is no doubt that these performers bring some serious acting and producing chops to the show. Check out the cast below.

To be honest, I don’t know much about Casey Jost. He plays the Drew Carey role if you are familiar with the format of Whose Line It, Anyway? IMDb has him listed as the senior producer for the series Impractical Jokers. Beyond that, Casey is doing his best to show off his boy band hair, and I know a little something about boy band hair. His job is to keep the show rolling along and elicit ideas and suggestions from the audience.

You may recognize Hailey from her role as Holly Valentine in Once I Was A Beehive. Hailey was the understanding new aunt to Lane Speer and the mother to the anxiety prone Phoebe.

Probably the most recognizable of the troupe, Lisa Valentine Clark stars in the hit BYUtv show, Random Acts. Lisa  played the over-the-top Young Women’s leader, Carrie Carrington in Once I was a Beehive and more recently in the new remake of Little Women. She has also starred in the web series Pretty Darn Funny. You might even recognize her from this pretty funny commercial for Chatbooks.

Lisa and Hayley were both guests on This Week in Mormons when Once I Was a Beehive was hitting theaters. Stream it below.

These two guys might be most recognizable for the roles as Ranger Cal (Von Wagoner) and Ranger Hobie (Nelson) in Once I Was a Beehive. Both were also listed as executive producers for the movie, as well. Von Wagoner also produced for The Saratov Approach and Impractical Jokers. Nelson starred in the Saratov Approach as Elder Popst and was an executive producer for the recent remake of Little Women.

I tried looking Thomas up on IMDb, but information about him is hard to find.

The first episode was a bit of an introduction to the show and how it works. Through a poll, the audience decided for the cast members to create Golden Age Musical using only the title “Liptstick Time” as a reference. To be honest it can’t e easy to come up with songs on the spot, I don’t envy the performers. There were some funny parts, like Lisa’s character was given the catchphrase “You so crazy!” or Lucas’ rule that he couldn’t look any one in the eyes. Overall however, I found myself wanting something more. I had a few chuckles, but I was expecting more. This is no way an indictment of the cast. Improv comedy is not easy and you won’t catch everyone with the humor. These are seriously talented actors, and it might take a few episodes for me to get into it, like most of the shows I watch. That being said, my boys thought it was very funny, so it may be a hit in the 10-18 age range.