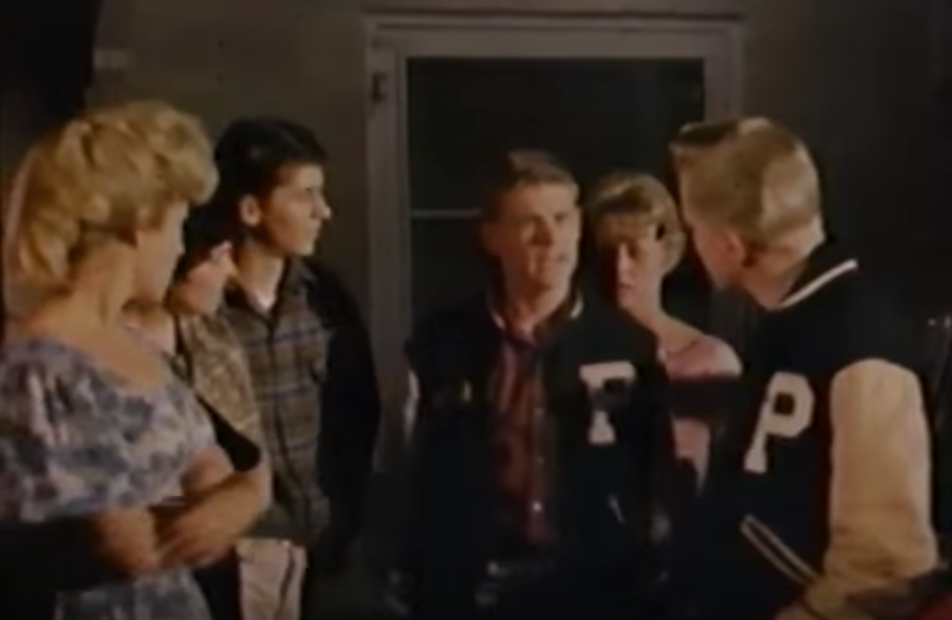 Early at the start of this column I featured one of my wife’s favorites—The Phone Call. This week we take a look at one that is a little less so for her. As a youth, she was amazed at the frequency with which Measure of a Man came up in conversation as the lesson for her Priest-aged family members, so I decided to see what the fuss (or not) was about.

Measure of a Man was produced in 1962 by BYU Motion Picture Studios for the L.D.S. Department of Education. It’s not one that I ever remember watching growing up, and our collection of LDS film anthologies was pretty good. Let’s dive in to this priest-quorum-lesson-worthy film.

To begin, we see Mike and Hal, two high school boys, flipping coins to determine who would select the next song on the juke box. The tone of the opening and attitude of the boys indicate that they are sure to select some sort of edgy new-fangled rock music. They insert the coin and then we hear the driving beat of “When the Saints Go Marching In?” Okay. Sure. The boys march out of the establishment—clearly late for their participation in a New Orleans-style Second Line Parade—and jump in a red convertible to whistle at the ladies on the way home.

Later we see Mike at home playing basketball. His mother watches him from the kitchen window. We then begin this film’s trademark. The persistent use of first-person voice overs to convey a character’s inner thoughts. It’s used throughout. A lot. Mom just wonders where the time has gone. He has grown up. He’s a man now, but surely he’s not crazy about girls like Mike’s dad was. No, he takes after Mom’s more measured approach to life. Surely he has never KISSED A GIRL! Maybe he has. Has he? You get the idea.

Mike comes inside and lets his mom know he is headed out to the drive-in with his “friends,” Hal and Blaine, for a root beer. mom is not pleased. She has heard “stories” about their “reputations.” She suggests Mike invite them over to his house where he can control the situation a bit more.  Not bad advice really, but Mike won’t have it. “A guy’s got to get out of the house every once in a while,” he says.

As he waits to head out on his adventure we get Mike’s internal monologue. He is confident he can handle these “friends.” He wonders why do moms know so much and have to get in your business, but in the end decides his mom is okay. He centers himself for his upcoming night of revelry by playing a few bars of “When the Saints Go Marching in” on his trombone. Nope. Still doesn’t make any sense. A bassoon it ain’t (read The Phone Call post).

Hal and Blaine arrive and they head out—weaving through traffic on their way to the drive-in. They slow down briefly when they see a cop but speed up quickly after. Night falls (how far away IS this drive-in?).

The waitress comes out with their root beers and we can clearly see a problem. There is NO condensation on the mugs. If they are going to the trouble to serve it in glass it should be in a frosted mug! What kind of place is this? We gain some insight from the waitress’ inner monologue. She is sure that these guys will be trouble and leave no tip. Hal and Blaine take turns trying to hit on the waitress. She brushes them off and asks them to pay. I still never realized how they paid for drinks as Mike even joked he only had confederate money. I guess because the waitress had some sort of southern accent? The waitress holds her own though and after seeing “Duke” painted on the convertible she says “Sorry, Duke, the Duchess is going out with the Prince tonight.” They conclude to go and find some “wild” girls. Girls that make the attractive waitress they just hit on  look like an “airedale.” Mike isn’t sure he is down for the adventure as he promised to be home by 10:00 p.m.

After ridiculing Mike for his proposed early departure they head to a different restaurant to find beer and “wild” girls. As they drive, each boy tries to out-tough the others. Drive faster. Drive more aggressively. But nobody really likes the hectic driving and no one really says anything. They arrive at a restaurant to meet Sue, Jackie and Peggy. Mike isn’t so sure and decides to call his mom and tell her that he is in a not great situation, but he changes his mind after being ribbed by Hal. They decide to leave the diner after gathering the girls and plan a drive to Eagle City so they can get some beer. Mike suggests they just stay local and drag Main, but his inner voice says after being labeled a chicken what can you do? “It’s a bad word after all.” Sue comes to his aid and denies his potential poultry status and affirms that yes, he will have some beer. They pile into the car to “The Saints Go Marching” (nope, still don’t get it) and head out.

We cut to Mike’s Mom. She wonders where he is. Why hasn’t he called? Her husband rolls over and think’s its fine but is then also shocked when he realizes the time. Because Mike is a “good boy.”

The kids arrive at the store but Mike doesn’t want to go in. Neither does Sue. They stay in the car so they can “talk” according to the others, while Hal goes in to buy the beer. The owner is his friend and thinks Hal is 21. Mike and Sue’s dueling internal monologues become an internal dialog as they mentally go back and forth–each one thinking the one is crazier than the other. “Mike is probably wild. I don’t want him to try anything,” Sue thinks.  “[Sue] looks like she probably necks like crazy,” Mike thinks.

One of the others brings two beers for Sue and Mike. They talk about the beer can, the condensation and how much beer is being opened in the world right that minute. There is some sort of beer geography lesson and each one wonders if the other will open it to maintain their coolness and shed the image of being “chicken.”

“What are you waiting for? Are you going to open it?” Sue says. Mike then assumes that she and her parents MUST be alcoholics. Mike says he will open one for her but he decides he doesn’t want to drink his. Sue is relieved. Hal says more for me and Blaine, but then Blaine backs off. Hal is frustrated. He went through a lot of maneuvering to get the beer and doesn’t want to return it. One by one kids drop out of the drinking party and Blaine decides he’ll take one for the team and return the beer. The film closes on Sue smiling as she and Mike call their parents.

As a general rule, church films from the 60s (or earlier) are more problematic than ones even made 10 years later. I think the world was just changing more quickly than church filmmaking. The language or situations often don’t age well. I try to look at the message and not just the execution. At its core Measure of a Man is about peer pressure–clearly something that persists today. The film does a good job showing how many times escalating bad choices could have been shut down by a “no thanks.” Pride, a desire to appear cool and be part of the “in crowd,” however, just kept moving the “wildness” up notch after notch. Remembering who you are and how you have promised to live in the face of others is often a tough choice. Especially as a youth when acceptance is everything.

I asked my wife’s two older brothers (she also has 2 younger brothers) what was the deal with this film and their youth instruction. One hadn’t seen it before I mentioned it to him, and the other was familiar wth it because they picked it almost every time the young men had been asked to teach (code for “watch a video”). Measure of a Man was in constant rotation with The Award. The film was designed to be used in a classroom setting. There is even a “What would you do?” title card screen with a few seconds of black after. The brother-in-law who can quote this film likes this feature a lot and still uses it fas a pause for discussion when he shows it to the young men on Sundays. He said “The young men who are forced to watch it now still chuckle more than anything,” but he likes it for the message of choice. “Just because you’ve made one choice doesn’t mean you have to keep making those choices when you’re uncomfortable. Mike got the courage to say no and then regardless of what happens next he can be sure that he did the right thing.”

I have a hard time believing that young men in the 90s took this seriously, and my brother-in-law confirmed that at least in his experience many don’t take it seriously today.   With the right youth leader, and the right questions, perhaps the goofiness could be a springboard for a meaningful chat about being your own person and standing up for what is right at the right time–if you can get around the church’s internet YouTube block to watch it.

Like many films of this era I give it a solid 2 “mehs” up. It was okay. The acting was pretty bad, the point of it is pretty good.  The many, MANY voice overs sometimes even add some humor to the story. Perhaps “When the Saints” was used ironically, but still it just made no sense at all. There were some memorable lines. My brother-in-law who hadn’t seen it before said “Wow. A corny movie that ended well.”

So there you have it. For me Measure of a Man doesn’t quite measure up.