There are many recent church films used to tell the story of the search for truth. I’ve written about some of them in this column. The story is familiar. Individuals or groups of people ask key questions: Why are we here? Where are we going? How do we find the answers we seek? Today’s feature could arguably be the beginning of that pattern in church film.

Man’s Search for Happiness is a 13-minute film produced by BYU to play in the Mormon Pavilion at the 1964-65 New York World’s Fair. (No it was not called The Church of Jesus Christ of Latter-day Saints Pavilion—it was called the Mormon Pavilion at that time). The church’s area had a prominently placed pavilion that included a full-scale replica of the eastern towers of the Salt Lake Temple, 2 large exhibit halls, a gallery, 2 movie theaters, and various private meeting rooms. The church’s pavilion was one of 140 pavilions that represented various countries, businesses and advancements. It took place for 2 6-month seasons between April and October in 1954 and 1965. Many pictures of the pavilion and exhibits are available online. 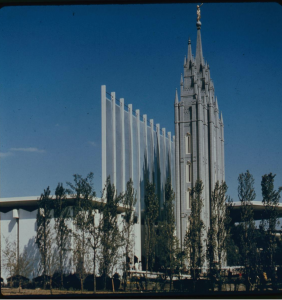 The entire theme of the fair was “Man’s Search for Truth.” David Evans–Brother to Elder Richard L. Evans of the Quorum of the 12 Apostles– was working on the project and suggested “truth” be switched with happiness for the church’s theme. Elder Harold B. Lee commissioned the film makers to take that theme and answer three great questions: “where we came from; our purpose and reason for being here upon the earth; [and] what happens to us after death.”

Elder Evans wrote the film and voiced the narration. In 1986 the church remade Man’s Search for Happiness by retaining the original script and narration while updating music and visuals. Originally, the film was to be made by a West coast studio, but after fasting and prayer the church took the project to BYU.

The 1986 version of the film is still in the church’s online media library. For the purposes of this review I started with the original and then focus on some of the minor differences in the 1986 version.

The film begins with a man walking down a road through the woods. He pauses as he looks into the water and we hear the narrator ask life’s big questions. “Why am I here? Am I only moving towards death?”

The water ripples and we glimpse the pre-mortal life. An all-white room with people wearing the white clothing they would wear in the temple stands in for this world. The movie tells us to understand where we are going we need to understand our beginnings by quoting Wordsworth’s famous poem: “Our birth is but a sleep and a forgetting / The soul that rises with us , our life’s Star / Hath elsewhere it’s setting…But trailing clouds of glory do we come / from God, who is our home.”

We see the birth of a baby and momentarily the pre-mortal and earth life are close together. We learn of the veil and the forgetting of our life before. We see the mother travailing in pain and learn we came to earth to learn about pain, life and death.

The water ripples and we see the man beginning to walk again. This life is part of the eternal plan and we have possibilities. Our search for happiness has real purpose and our life is worth living.

We cut to a demonic looking clown at the top of a carnival funhouse entrance. The narrator tells us life offers us time and freedom of choice. We see various visuals ranging from harmless carnival games, to dancing girls, to games of gambling and chance all while hearing about the choices we can make in life. A man wins a porcelain doll for his wife/date but the doll is quickly broken as he jostles her—resulting in a minor stink eye and a reminder that all things material are fleeting.

After the carnival chaos we move to the visual of an hour glass and clocks ticking in space. Every hour of mortality is accounted for. We see an old man setting his watch by one of the clocks. He takes a young boy by the hand and they go to join the boy’s family for dinner. It’s the husband and wife from earlier—now with 3 children—and the old man is the grandfather. The family gathers together to read the scriptures and the narrator talks of the role of Jesus Christ. We also cut to a scene of Christ appearing to the apostles in the closed room after his resurrection.

We see the family again, this time in a snowy graveyard. Death is a part of life. We see a representation of a person walking toward the light and see the grandfather dressed in white joyously greeted by family and friends as the music swells with a mighty “Alleluia.”

The husband and wife are walking in the dessert taking in the rocky and sparse beauty around them. The mountains of the desert are replaced with the Mountain of the Lord—the Salt Lake Temple.  The narrator teaches of Joseph Smith and the restoration accompanied by a visual of the First Vision in stained glass. He teaches of the difference between salvation and exaltation.

The film builds to a conclusion. We see the peoples of the world milling about superimposed over each other.

“We cannot just believe. We must work and learn, search and pray, repent and improve. This is the way to peace and happiness. This is every man’s search.”

We see the family with their children walk forward against a black background. The music builds and the “heavens” open behind the family.

The newer version is essentially a shot for shot remake of the original with improved production values. Some scenes are given a little more time while others are contracted. It’s safe to say that it is the same movie, just with better effects, costumes and visuals. The first version views salvation more as an individual journey, but choices for the 1986 version emphasize salvation as a family effort and journey.

At the beginning we see the family in a park rather than a man walking alone in the woods. The pre-earth life is a lush paradise rather than a stark and white waiting room. We also see people walking up white steps and through a veil to begin the trip to earth. The birth of the baby is more joyful than painful with the entire family coming to visit and celebrate the birth. The father is definitely more involved with baby care and we see a scene with the father rocking the baby and exchanging loving looks with his wife.

The pensive father is brought back to the family picnic and we see the clock montage that looks more like clock showroom than Dali painting. Instead of the crazy clown and choices at the fair initially, we see a couple speeding down a road, a man in an adult bookstore and a woman excessively primping in front of a wall of mirrors. We do end up at the carnival with a broken doll and a stink eye from the date.

The grandfather—a little frailer this time—still goes with the grandson to eat dinner and then read scriptures. We see a better staged recreation of the Savior appearing to the apostles as well as a slightly longer scene of the grandfather’s funeral in the cemetery rather than a casket spray enshrouded by a snowpocalypse.

The film concludes with the entire family hiking through the mountains. We see recreations of Joseph Smith teaching and founding the church. Next the narrator reminds us to build upon the teachings of Christ accompanied by a sweeping view of the Christus in the Temple Square Visitor’s Center. The music swells and we see the family summiting a mountain looking on majestic canyons below. We close on the church logo.

Famous Christian preacher and leader The Reverend Dr. Norman Vincent Peale saw Man’s Search for Happiness at the fair and said the Church’s film “motivated one to want to make the most of earth life, and the last two minute[s] of the film were the most touching, the most inspirational, and most revealing of any two minutes of a film I have ever seen in my entire life.”

He sums it up pretty well. The fact that the 1986 and 1964 versions are essentially the same speaks to the simplicity of the film and the strength of the narration and script. The minor tweaks for 1986 make it a bit more robust and improves the visual story telling. You could remake it again and the narration would not seem out of place today. It set a strong pattern for the future Direct Gospel Message videos and many others to come.