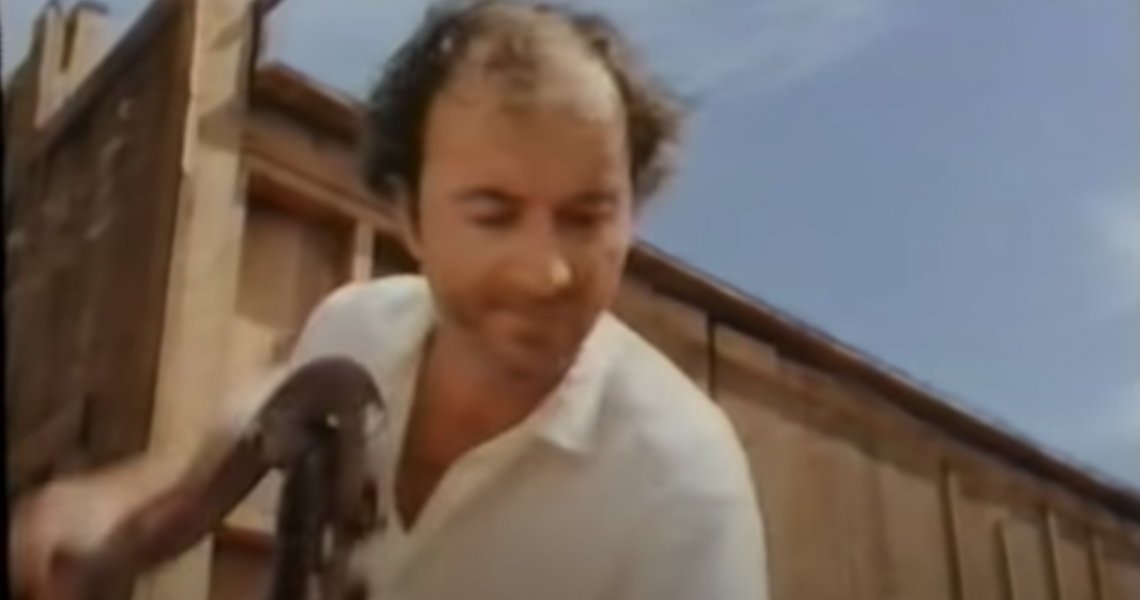 [dropcap]S[/dropcap]ummer is heating up, and I thought we could embrace the heat with The Consequence of our Choices from 1985. This 8-minute film was produced by the Visual Transit Authority and appeared on Family Home Evening Video Supplement VHS tape that was used in conjunction with the Family Home Evening Resource book. The film became more commonly known as The Pump.

As the film begins we see a plain title card with the actual title of the film: The Consequence of our Choices. The title fades to black and we transition to the following quotation:

“If you trust too much, too easily you will be deceived

The ominous quote is replaced by bouncy big band music and we learn we are in the vicinity of Rice, California, 1947. This town is pretty much in the middle of nowhere in Southern California. It’s on CA State Highway 62–3 1/2 hours from Los Angeles, 3 hours from Phoeniz, Arizona, and about an hour from Joshua Tree National Park.  The picture associated with it in Google Maps is an abandoned shelter next to a railroad track. It’s remote is what I’m saying. Oh, and its 103 at 11:30 a.m. California time as I type this. Remote and hot. But it’s a “dry heat.”

We see our protagonist driving in a period-appropriate vehicle on a lonely desert rode. The jaunty music continues to play. He slows as he approaches a turn off and consults the map. We see a bold warning surrounded by a box and printed in red:

“Note: Do not turn off main highways onto desert roads without first making local inquiry.”

Translation: Don’t drive off the road without telling someone where you are going. He checks the map, and thinking he sees a short cut, turns down the road anyway.

Images of desolate scrub, cactus, and sand dunes are underscored by the buzzing of insects and the lonely wind. Another sound slowly fades in–a car failing to turn over. The driver tries again and again. Each time the car sounds progressively worse. He slams the steering wheel in frustration and heads off to look for help. The music becomes ominous as he walks down the road. He walks for a long time (for film that’s only 8 minutes 38 seconds). He crosses sand dunes and and the cracked ground of long dried up river beds. Past red rocks and more sand. Eventually, he finds the remains of a small town. He is skeptical but walks down to the down anyway. He is greeted by a desert lizard but then becomes animated as he sees an old metal pump. He runs to it and begins furiously pumping only to to get nothing.

He sits down against a rail and notices a small bucket hanging from the pump. There is a note in it narrated by the voice of an old prospector. The prospector says there is a bottle of water under a nearby rock. If he uses that water to prime the pump and then pumps like crazy he will have plenty of water. He is cautioned not to drink the water in the bottle–it’s not enough to quench his thirst. Just prime the pump, drink your fill, fill up the bottle, and put it back for others.

The man frantically digs under the rock and finds the bottle. He lifts it to his mouth but the words of the prospector continue to repeat in his mind and lower in pitch and clarity until the voice of a water demon is warning him not to drink.

Cut to the dune-filled desert. We see the man collapsed on the sand. We follow his footsteps back and we see the empty bottle not too far from where he collapsed. The music turns back to the happy big band tunes and we see the pump with a telltale drip of water.

If you look at this film from 40,000 feet, its not so bad. Usually analogy-based films are where these films shine. Many church films from earlier periods were all about preaching and obvious lessons rather than the parable-based learning approach. The film is a rather dramatic representation of how our choices can impact our lives. We learn that we have warnings in life to stay on the path. Even if we choose to leave the path there are at times things that will help us. If we choose to ignore those paths and aids the result is not always pleasant. Staying on the “gospel highway” will give us safety and peace.

Looking at the film a little closer we are led to believe the man drank from the bottle and not the pump. But the drop of water on the pump is a confusing visual to end. Does the drop of water mean he actually primed the pump but it didn’t work? Did he just not do it right and was left with nothing? Just a little final imagery I found puzzling.

The Consequence of our Choices mainly focuses on the consequences an individual’s choices on themselves. But there is also a lesson about how our choices have consequence on others. The driver took the bottle and presumably dies in the dessert. Now if someone else should happen to come upon this town the water is lost to him or her because of the choices of this man. He’s basically condemning all water-starved travelers that may come this way, and he could have spent a little extra time to make sure others were protected. Given our current climate is this an allegory for public mask wearing? A bit of a stretch, but being inconvenienced slightly for the benefit of others is relevant and definitely fits with this secondary theme.

As always please leave a comment here or on the Facebook page if there are films you would like to revisit. Thanks for visiting the vault!

PrevPreviousEP 485 – Wear Your Mask, Kids
NextEP 486 – We Are Not Speculating About Temple Changes AT ALLNext