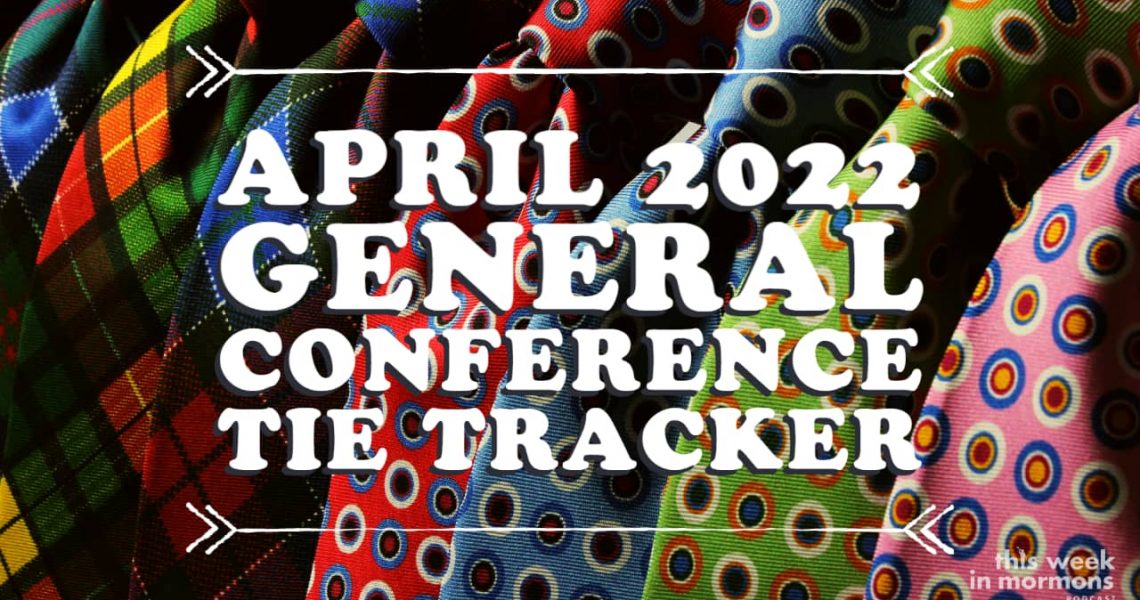 When we combine fashion and spirituality, we all win.

And just like that, it’s April of next year. It’s hard to believe six months have flown by since we last brought out the Tie Tracker™, our patented, copyrighted, exclusive means of keeping tabs on the neckwear and overall dress choices of General Conference speakers. (We’d say “dress and grooming” choices but is anyone showing up with pesky sideburns going past the ear? They wouldn’t dare.)

Last October was a terrific treat for Tie Tracking. In fact, we’d rate our exercise in tie tracking a solid 7.8/13, which is… well, we don’t know. That’s the first time in 10 years of doing this we’ve bothered to rank an iteration.

Anyway! To explain this a bit more, sometime in those halcyon early years of This Week in Mormons, we started keeping track of the colors and designs on the ties of speakers. We eventually started including female speakers, as well. This is an exercise in completely unnecessary data gathering, but it’s fun to see if any trends prevail. Arguably the most famous thing we uncovered was the late Elder Robert D. Hales wearing the same tie every single conference. That was us!

In some conferences, for example, purple makes a solid run against normally dominant red and blue. That wasn’t the case last time, but gold made a surprisingly strong showing.

Likewise for design. Patterns usually dominates or at least vies for the title with stripes. But sometimes we get a strangely stronger showing of plaid, paisley, or polka dots. We just never know!

While we’re on board with the inspiration behind moving Elder Uchtdorf out of the First Presidency, we’ve spent four years being bummed that it means less Silver Fox, especially because he, unlike his fellow Apostles, changes his tie for every session, giving us even more beautiful, shimmery ties.

In all sincerity, we’ve found the Tie Tracker™ to be a great way to keep children more engaged during a long weekend in the living room. They may not process every word uttered from a pulpit, but at least you can say you kept your family in the same room.

Bookmark this page. We’ll publish updates with each session. And we hope you’ll join us on Twitter, where the hashtag #TieTracker points to all things related to this noble effort. We’ll especially appreciate your help on there when it becomes more difficult to determine the color or even design of some ties.

Elder Ojediran finally brought some orange and paisley to the mix! This was almost a General Conference with almost nothing but patterns and a handful of stripes. 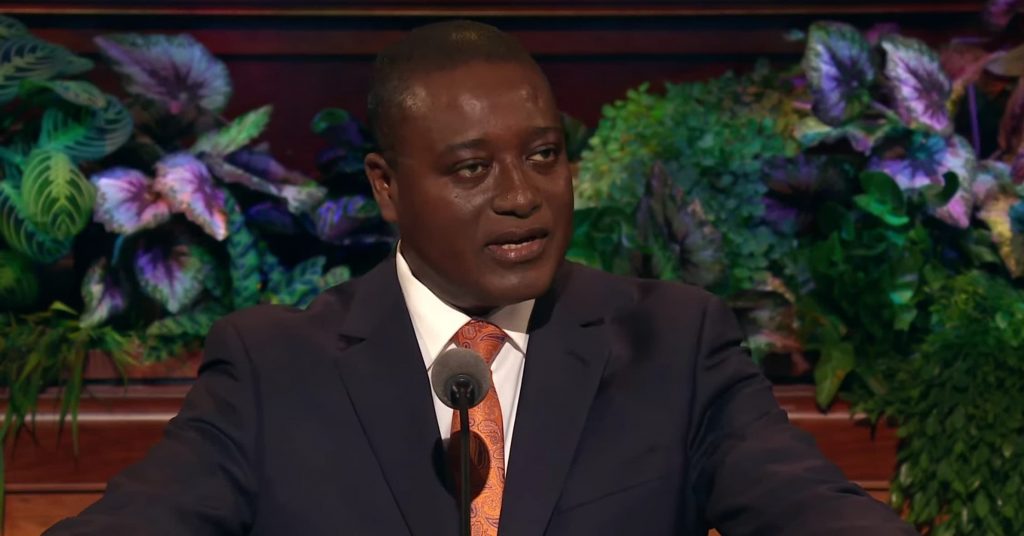 Elder Jorg Klebingat also blessed us with the first plaid tie of the conference. Blue and black. Wild! And then Brother Mark L. Pace wore a mint patterned tie. It was a great session for breaking the mold!

But let’s talk about Blue’s resurgence. Somehow, by some sort of miracle name Dieter F. Uchtdorf, Blue pushed back in the latter session of General Conference and actually beat out Red by 0.6%! This is one of the best races we’ve ever had on the Tie Tracker.

Of course patterns still won the day, with two-thirds of all ties worn adopting this style. This one was never much of a contest. It’s just been that sort of General Conference.

We’re sad no more women spoke this afternoon, but with a Women’s Meeting, we had greater representation. Pearls had a stronger appearance than normal even though they didn’t win.

It’s been a great General Conference and a great Tie Tracker! See you in six months!

Elder Stevenson! That was something else. Such stripes! A smooth, nearly Key Lime green, coupled with pastel yellow and grey? Yes, please. 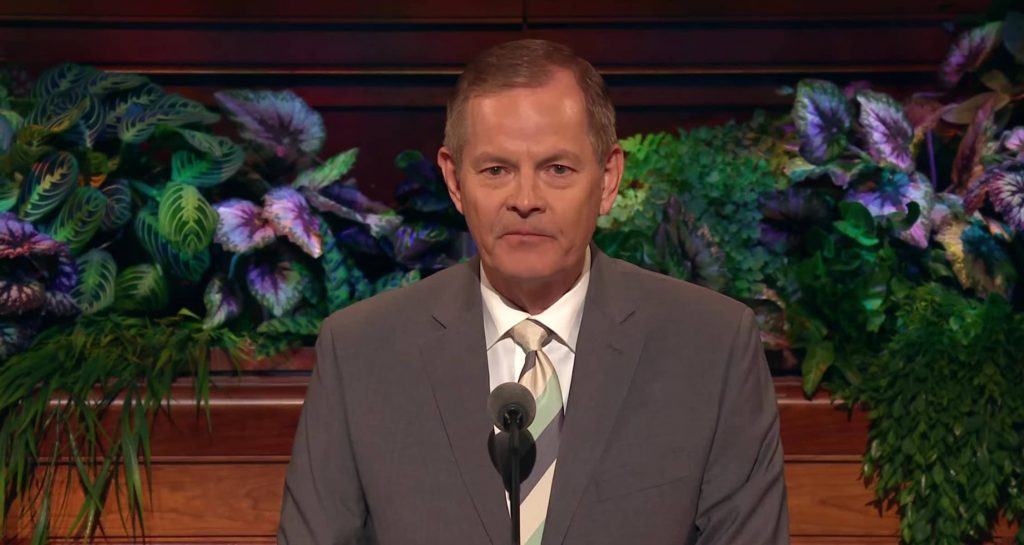 Despite a few reprieves, Red continued its dominance with only one session left. It will take an outsize showing by Blue to have any chance over overtaking our color leader.

But even beyond that, the prevalence of red patterned ties has been staggering. It’s not like we have a bunch of red striped or plaid or paisley ties. Just red patterns over and over again.

What a fantastic session this was. Terrific remarks from Sisters Porter and Craven, along with President Bingham helped us find meaning and hope throughout our trials. Here’s hoping we get the hat trick and Sister Eubank also gets to speak before the conference is over.

Oh, and of fashion? Blue jacket and white blouse for Sister Porter. Sister Craven got more fun with a cream coat and a floral blouse beneath. And President Bingham was nearly as pink as Pepto Bismol, and it was glorious.

Elder Renlund closed out the session with a solid yellow and blue striped tie, giving Blue a badly needed leg up.

Elder Jeffrey R. Holland brought the first polka dots to the weekend’s proceedings, with a simple bright red tie. But it was patterns that continued their dominance. Over 70% of speakers so far have had patterned ties. It’s surprising how lopsided things are at present.

Likewise, Red is way out ahead of other colors, although Blue has come back fighting a bit more.

In other news, we’re grateful for the work of the outgoing Relief Society General Presidency. They have been amazing. And the inbound presidencies for Relief Society and Primary look great. Awesome things are yet to come.

President Oaks started things beautifully with a vibrant—even daring—patterned purple tie, giving purple what might be its only lead for the entire weekend. 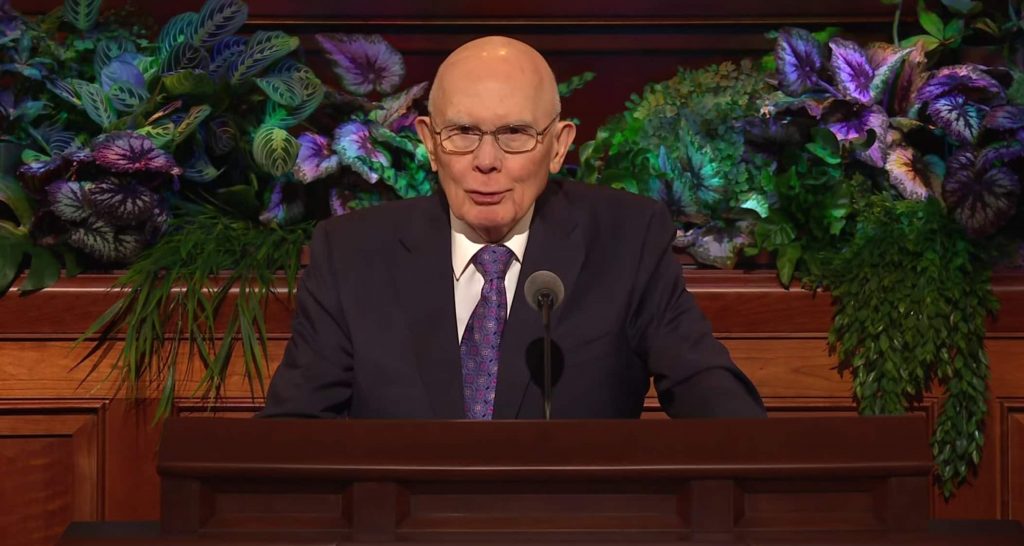 Patterns, in general, simply dominated the session. It took until Elder Gavarret’s talk to get some stripes – over an hour into the session. Nuts!

Leave it to Presidency Eyring to bust out some fat stripes. He’s old school like that and reliably wears stripes.

As for colors, Red and its variants are way out ahead, comprising over 50% of ties so far. Blue in languishing far behind. Look for it to surge forward in coming sessions. 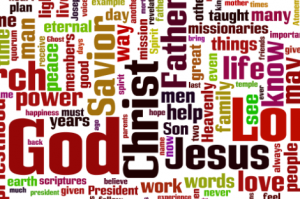 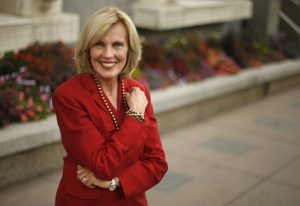 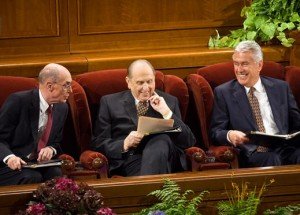