BYUtv is changing, and it wants you to take the journey with them.

BYUtv is changing, and it wants you to take the journey with it as it releases a slew of  new shows in hopes of attracting a more diverse audience base. Say goodbye to the days of professors sitting around a table discussing books of scripture, or that repeating version of Sacrament Meeting from the 1980s. Well, almost say goodbye. I’m sure there are people out there who still enjoy these. But I can’t imagine they are a huge financial boon to the network. Look out world, the new BYUtv is coming at you!

This is all part of a major rebranding that began when BYUtv managing director Michael Dunn was hired in 2017. It should come as no shock that BYUtv is selling itself as the family entertainment network. But Dunn has been working to expand that network to more than just cable and satellite, bringing BYUtv into the 21st century with through popular streaming platforms.

Dunn has said the following regarding the new path of BYUtv:

“We have such a singular focus on this co-viewing, family audience. We say it’s our lane. And I think the branding really reflects that. It feels a little younger, a little hipper. Maybe a little less stodgy and more embraceable.”

So with that in mind, it’s important to go through a few of the “younger, a little hipper” offerings and see what’s in store at BYUtv in 2019.

Studio C: Studio C has been one of the biggest hits for BYUtv, bringing laughter and joy to young and old alike. With Studio C, BYUtv was able to capture not only the TV viewership, but the online viewers as well. The release of individual sketches on the Studio C YouTube page has brought a new generation to the table and has garnered the attention of big names like Conan O’brien. At 64 Million views, the tragic and humorous tale of soccer goalie, Scott Sterling is by far Studio C’s biggest YouTube success. With the announcement of Studio C’s original cast moving on to form their own online entertainment company, it’s yet to be seen whether Studio C can keep the momentum moving forward.

Other shows like Relative Race (check out our interview with the show’s host), American Ride, Random Acts and Granite Flats (which as canceled after 3 seasons) have seen their own share of success.

Extinct: As a huge fan of Sci-fi I was pumped for this, especially when I heard it would be directed by Orson Scott Card. Seriously, if you haven’t checked our Card’s novel Ender’s Game, you should. Even though the premise of the show was interesting, I found the show really slow and lacking in action. Although my sons liked watching it, the show sort of fizzled, and as the name implies, it’s now extinct.

Splat-a-lot: This program is a cross between American Gladiator and Wipe-Out with Nickelodeon Slime poured all over it. Hosted by Stacey Harkey and Tori Pence of Studio C fame, it’s just one bad pun after another as kids debase themselves in the name of amusing competition. But there is something mildly entertaining however in watching kids slip, slide and flop throughout the course. When the kids put it on, I pretend I’m not watching, but like a train wreck, I just can’t look away.

Tricked: My oldest son is big into magic right now and this show is one of his favorites. World-famous magician Eric Leclerc uses mind-bending sleight-of-hand and a slew of disguises to pull pranks on unsuspecting people. Many of his tricks are accompanied by the use of hidden cameras. So thanks, Eric! Now not a day goes by in my house without the words, “Do you want to see a trick?” being said.

Hetty Feather: This is a show about a young girl in Victorian-era London, abandoned as a baby at the Foundling Hospital by her mother. Under the iron fist of Matron Bottomly, Hetty attempts to navigate through the hardships of life, and become more than just another foundling. In the wake of the success of other shows from across the pond, Hetty Feather seems like a shoe-in for success, if it can sustain. It has just been picked up for fourth season, which makes my wife rather happy. It’s worth noting that BYUtv does not produce Hetty Feather; it is a CBBC production and BYUtv picked up the US distribution rights.

There are a few more for you to check out, and here are just a few: Lucky Dog, Best Cake Wins, Just Like Mom and Dad, Etc…. You get the point. There is a lot for you to peruse.

Show Offs: A 30-minute musical improv program, set to premiere on March 18 at 6 p.m. MT. Hosted by comedian Casey Jost, the show also features cast members Lisa Clark (Random Acts and also once a guest on the show), Maclain Nelson (Saratov Approach), Hailey Smith (Once I Was a Beehive), and Jake Van Wagoner (My Brother, the Time Traveler). The cast will spontaneously improvise a play or musical,  prompted by ideas from the studio audience. Think Whose Line Is It, Anyway, but without a hint of a hint of ribaldry.

Battle of the Ages: Battle of The Ages is a comedic game show that pits two families from multiple generations against each other to battle it out in a game of fun challenges based on trivia and themes from selected eras. Battle of the Ages premiers March 20th at 6:30 p.m. MT.

Dinner Takes All: What could go wrong in a family cooking competition? Hosted by celebrity chef Kelsey Nixon, this battle for kitchen supremacy, puts two teams of five family members in a head-to-head cook-off of their “best Sunday dinner.” Using  family recipes to create an entrée, three side dishes, and a dessert, families compete to receive a year’s worth of groceries or a cash prize. Dinner Takes All also premiers on March 20th following Battle of the Ages.

I know that is a lot to take in. I’m exhausted just writing it. But stay tuned. I will be back with reviews of the shows. 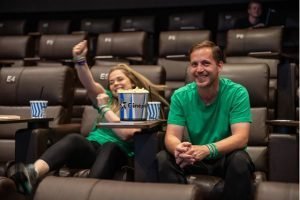 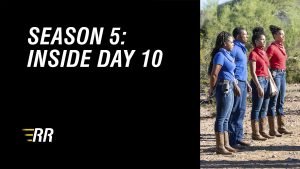 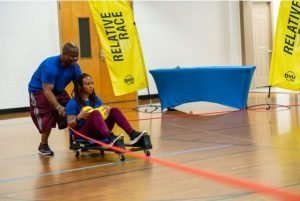